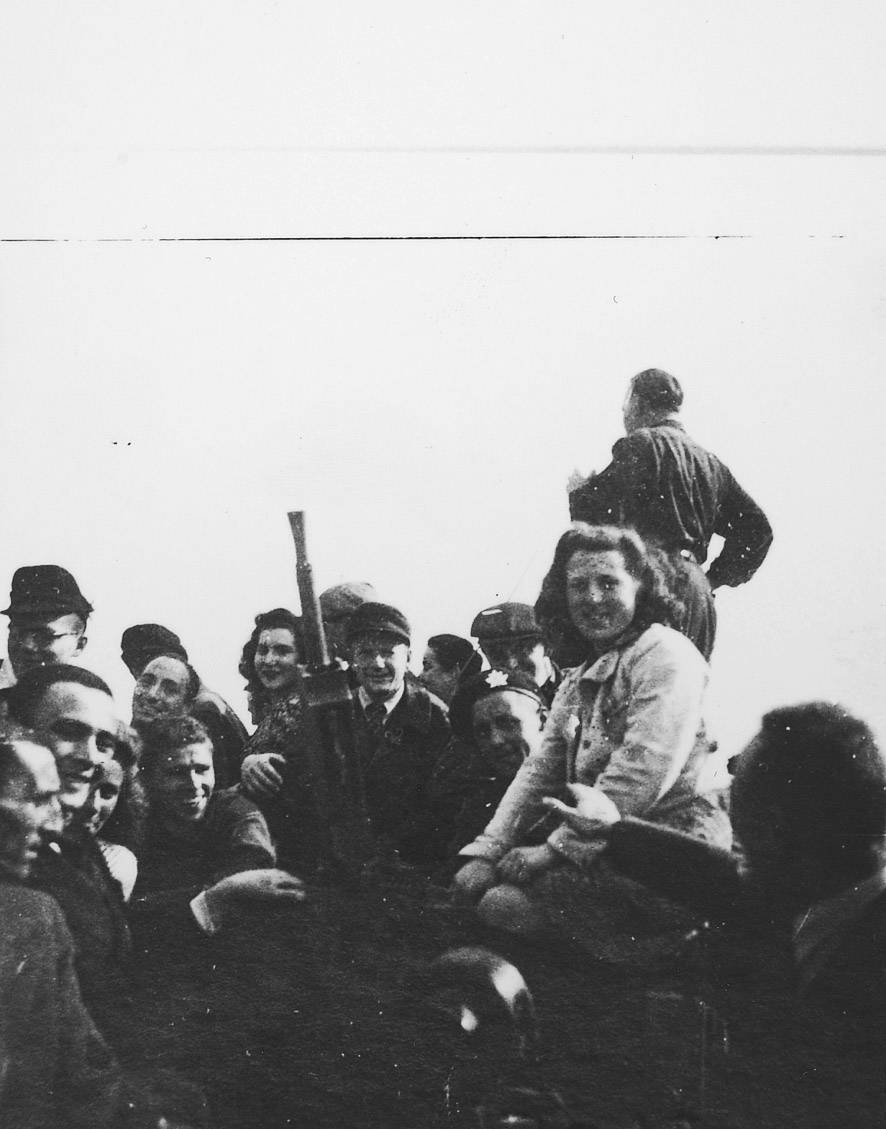 The liberation of camp Westerbork from the perspective of a former inmate. After the war Walter Lenz (1903) emigrated with his wife Sara (1905) to the United States where he wrote an eyewitness account about his life in the camp.

‘The SS began leaving on the afternoon of the eleventh of April, 1945. The girlfriend of the camp commander in her role as secretary carried his beautiful leather boots as they left.
My sense that liberation was near was confirmed when SS officers came to me, gave me their hand and said "Auf Wiedersehen, Herr Lenz” . In the past they had usually greeted me with just “Lenz”. Actually, all of us in the camp knew that the Allies were near as we heard them fighting at the Orange Canal, a few miles to the east of us.

By three o’ clock in the morning the SS had left, and around eight, contrary to orders not to leave the camp, I and two others walked to the German command post and took a volume on art history from the library of the commander. Then I and someone else went outside the camp to a bunker which we now used as an observation post. We went to sit among the trees to see the approaching Allies. But instead of approaching Allies I saw my only tank battle. Directed by spotters, Allied tanks were shooting at German tanks which were slowly retreating. Unfortunately, the Allied tanks did not advance in the direction of the camp. In fact, after some shooting they seemed to be retreating.

I returned to the camp and reported my news to Kurt Schlesinger, who for me was the Jew in command. In the afternoon Aad van As, the leading Dutch commander, made all of us assemble in the camp’s Great Hall, and while we were there other observers were sent out to bring more information about the position of the Allies. Suddenly someone thought of phoning to a farm between the camp and the canal. Now we learned the Allies had in fact crossed the canal and were on their way to the camp.

With a feeling of unbelievable excitement we ran from the hall in the direction of the Allies. Suddenly, in this late afternoon of an unusually warm spring day, we saw the German soldiers we had seen moving up to the canal in the morning following Allied soldiers as prisoners! We raced toward the Allies, and wild jubilation broke out. That night the camp had a fantastic celebration but I did not participate. I was completely exhausted, having hardly slept in the previous twenty-four hours and feeling the strain of tension I had been under. I went to sleep.

The next day, for me, but not for many others, three events occurred which muted my enthusiasm. Roosevelt’s death shook me. News of his passing came to us the day after our liberation, and I at least was quite troubled by this revelation. Secondly, on the day after our liberation, and completely contrary, to any of my expectations, the Canadians took some twenty Jews into custody, and as it turned out, held them about two weeks for interrogation. These arrests came as a blow. The men were persons I knew and had worked with, but they had also been involved in the transports, an involvement I did not share. The Canadians had their names from lists Dutch Underground members present in Westerbork had provided the Allied soldiers.

The third element that muted my feeling of liberation was completely different from the other two, but in many respects far more profound. Shortly after the Canadians arrived it became clear that something was bothering them. They asked a number of questions that made little sense to us at the time: "Why were we so well fed? Why were we not sickly, on the verge of death?" In fact, as cruel as it may sound now, I had the feeling that our liberators were in a sense let down, for as we soon learned, they had steeled themselves for liberating another Bergen-Belsen.

Why were we so well fed? Why were we not sickly, on the verge of death?

While this reaction helped mute my enthusiasm, it also began to open wide the door to the horrors we had all escaped. Having worked with men who repaired radios I had heard in 1943 a BBC report that a British MP by the name of Golan had told Parliament the Germans were killing large number of Jews with poisonous gas. From time to time we had used different devious ways to learn where the transports were going. Speaking of myself, I assumed the transports were destined to prison camps like Dachau, where I had been before coming to Westerbork. To me that meant camps were an able-bodied person had a certain chance to survive.

When the liberation brought with it radio news from the American army, we slowly learned of the extermination centers and death camps for the first time. And horrible as it was I found myself listening primarily to the names being broadcasted from Theresienstadt in late April, for I had reason to believe my mother was there. In fact, news from other camps became really secondary.

There were a number of different reasons why liberation did not bring with it freedom of movement. Those who had or thought they had a place to go in Holland could not go because of military reasons. The Allies on their northern front, drove eastward toward Germany, and did not stop their main advance because of Holland. Essentially then, all movement had to wait until the Allies secured Holland. The process of release from the camp also affected our freedom to move. After a few days the few Canadians who had governed us left and turned the camp over to Dutch officials. These let the Dutch leave the camp first, apparently following the principle of last in, first out. After the Dutch the officials released those refugees who had places to go in Holland. Then they turned to real refugees, who really had no place to go. It was not until early July that the last refugees were let go. These were some 100 or 150 of the original refugees who had helped establish Westerbork. In short, although liberation made it possible to go just outside the camp and for some like myself to go some distance from the camp, liberation did not bring with it the instant right of free movement.

Nor did liberation bring with it a quick change of routine. The Dutch authorities maintained the routines of the camp. In fact, I personally found myself under more rigorous discipline than in the last months under German rule. Taking into account the fact that in the first few days after liberation there was no sure way of knowing that the Germans might not return and reoccupy Westerbork, liberation brought with it the possibility of committing oneself again to the abstraction of freedom. And that in itself was a great event for those who had survived.’